skip to main | skip to sidebar

The Toll of AntiChristian Violence

Our Missionary Lost his house in Orissa floods 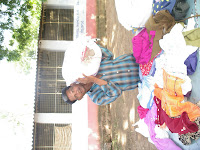 Our Missionary in Orissa came to yesterday stating that His house was collapsed due to river floods. So we immediately gave some relief material to the people in orissa and also some money to rebuild his house. We need partners to advance this ministry. 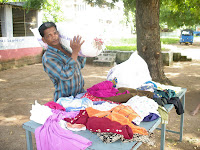 Posted by Ecclesia at 8:47 PM No comments: 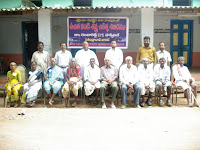 We have conducted a free eye camp and
distributed free reading glasses to 50 people and we have selected 10 people and we have sent them to Hyderabad Dr.Reddy Eye hospital where they were operated.The group in Ist picture is the group that went to Hyderabad for surgery.Bishop Daniel with the group that underwent eye surgery. Every week we are conducting 2free medical camps in the villages where there are people suffering from Dhengu and Chicken gunya fevers and kinds of fevers. We are seeking for partners who can provide medicines to advance this ministry. 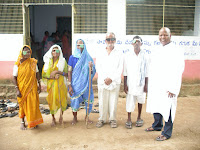 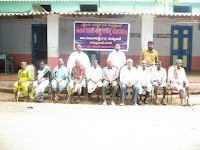 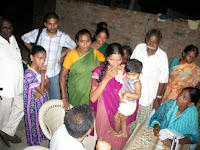 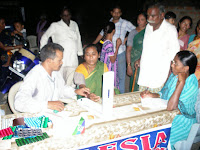 Posted by Ecclesia at 8:27 PM No comments:

Letter from Aicc Regarding Karnataka & Orrisa

>> _____>>> In protest mode: Christians take out a rally against attacks on Christians> in other States in Vijayawada on Saturday. ->> VIJAYAWADA: Demanding that the Naveen Patnaik Government in Orissa be> dismissed and a ban on Bajrang Dal be imposed with immediate effect,> members> of the All India Christian Council on Saturday took out a rally and staged> an impromptu rail roko for a brief period. At a public meeting held at the> Gymkhana grounds, leaders of different political parties expressed their> solidarity with the Christian community and condemned the attacks in Orissa> and Karnataka.>> Describing the violence as an "attack on secularism", Council national> secretary Syam Paul said such incidents were posing a threat to religious> harmony. Finding fault with the Orissa Government for not taking any action> against the religious forces that were openly admitting their involvement> in> the attacks on Christians, he said that the Government of that State had> lost its credibility to govern. "Religious conversions are not> anti-Constitutional, only forcible conversions are. Unfortunately, the> Hindutva forces have launched a false campaign, while the media too is> biased in covering news pertaining to conversions," he said.>> Dr. Paul said that about 350 villages were attacked in Orissa, and over> 23,000 were taking shelter in the relief camps set up by the authorities.> He> said the facilities were insufficient at most of the camps and food was not> being served in time. Many people had not been given blankets. "The Central> government should take the initiative to arrange basic facilities at the> relief camps," he demanded.>> Mayor Mallika Begum opined that the term "forcible conversions" had no> meaning, as no person could make any other to change his or her religion by> force. "One can change one's faith only when he or she strongly believes in> the other faith," she said.>> Attributing the attacks on Christians in Orissa and Karnakata to the> "identity crisis of some religious fundamentalist forces," Ms. Begum called> for rooting out such forces from the society. "India is a beautiful garden> and such forces are like pests in the garden," she remarked.>> Council's Krishna district president Kodali Alia presided over the meeting,> in which leaders of the Telugu Desam Party, Left parties, Lok Satta Party> and Praja Rajyam Party were present ,And the Christian leaders Rev.K.Pratapsinha,Rev.S.Barnabas,Bishop.Daniel.D.Kalyanapu,Dr.Moses
Chowdary,Rev.M.Johnson,Rev.Devaraj and etc were present on the dias . Later, the activists took out a rally> to the Sub-Collector's office. They stopped at the railway station for a> while and staged an impromptu rail-roko for a brief period, taking the> police by surprise.
------------------------------------
Y
Posted by Ecclesia at 12:03 AM No comments:

Kashmiri Christians Critical in Kashmir valley
Dear Prayer Partners from last three months we are facing much problems in the valley , as again the year 1990 came when they started jihad,
this problem came from amaranth shrine board and fire all over the valley and also Jammu started another struggle , due to this problem , we
kashmiri believers are facing much problems.All the parties joint hands with each other such as.JKLF. AMAMI MUSLIM LEAGE, HURRIET CONFERENCE, AND JAMATIS, Sikh people also joint hands with them. The problem came large
and still struggle will go for three months more.Here was curfew, now total shutdown. The people their community serves their own people Sikh people serves their own Sikhs, while I see all
people serve their own people.Our missions, who have come in the valley for services, some have left the valley.We Local Kashmiri people where we can go. In Jammu Hindus burnt alive most of Kashmiri. We have 85 families all over valley and they don’t
have food in their house. I Appeal /Request to your good self to provide Relief / Ration for the given families. We need urgent materials.1. Rice2. Atta 3. sugar4. Gas5. Dals When you hear news of Kashmir the India channel; don’t show real picture of the valley. You can go to our local news papers you will find real
situation in the valley you can log Kindly pray and keep us in your prayers. Pastor Paul Augustine
Posted by Ecclesia at 12:02 AM No comments: 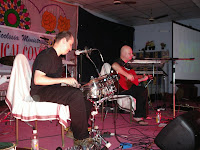 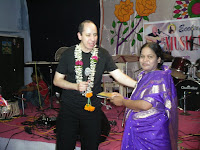 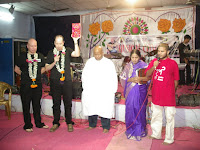 On Aug 17th in Ecclesia Full Gospel Church Kazipet, India A new audio Songs CD was released by Ministers, Thomas and Simone Mora from Chillie. These songs were written by Bishop Daniel and sung by Moses Kalyanapu, Alfred Kalyanapu, Azuba Kalyanapu, Rebeca, Naomi, Samson and Karunakar.
The Ist copy was given to the Ist lady of the Full Gospel Church Pastor Azuba. And we had a wonderful musical concert by the Local band directed by Pavan and followed by the Ministers from Chillie. And It was a great awakening in the Church thru this Worship
Posted by Ecclesia at 12:18 AM No comments: 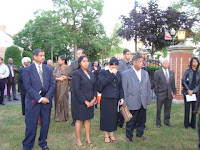 Mrs Dayamani w/o Bro Thomas Kalyanapu, founder of Ecclesia Ministries, SoPlainfield NJ USA, went to be with the Lord on July 7th 2008. Funeral took place on 10th of July. Col Phil Kalyanapu and his family, Bro James Kalyanapu and family, Bhaskarla's and Telugu Fellowship friends and the Scotch Plains Baptist Church members Partook in the Funeral and in Memorial services.Kindly pray for the bereived family. 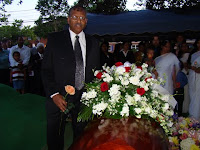 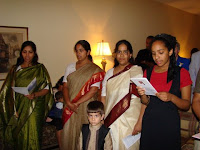 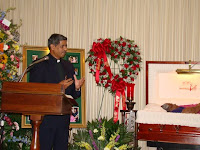 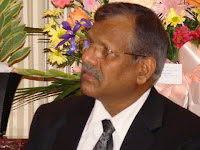 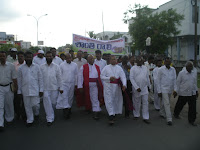 Christians in Tricity Andhra Pradesh demostrated
a peace rally and submitted memorandum to the district collector . Catholic Bishop Dr. Thummabala and Charismatic Bishop Daniel D.Kalyanapu and other leaders of the city prayed for the comfort of the bereived families in Orrisa. Christians from all denominations gave their solidarity in this Rally. 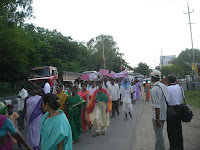 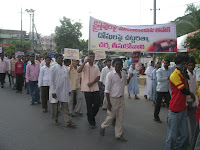 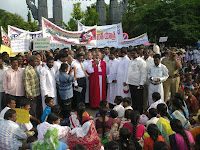 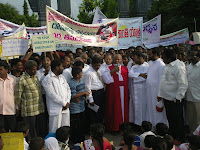 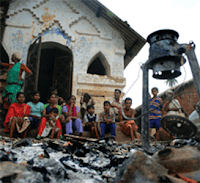 1. NUN REPORTED BURNT ALIVE: A Christian woman, possibly a nun, was
reported burnt alive on 25th August 2008 by a group of Vishwa Hindu Parishad mob which stormed the orphanage she ran in the district of Bargarh (Orissa). Police Superintendent Ashok Biswall has told this to news reporters. A priest who was at the orphanage was also badly hurt and is now being treated in hospital for multiple burns.
2. NUN RAPED: A young Catholic Nun of the Cuttack Bhubaneswar diocese
working Jan Vikas Kendra, the Social Service Centre at Nuagaon in Kandhamal was reportedly gang raped on 24th August 2008 by groups of Hindutva extremists before the building itself was destroyed.
3. SENIOR PRIEST AND NUN INJURED: Fr Thomas, director of the Diocesan
Pastoral Centre in Kanjimendi, less than a kilometer away from the Social Service Centre, and another Nun were injured when the centre was attacked. They were taken to the police station in a disheveled state as the armed mob bayed for their blood. The Pastoral centre was then set afire.
4. BALLIGUDA CHURCH BUILDINGS DESTROYED AGAIN: On 24th August 2008
evening lynch mobs at the block headquarters of Balliguda, in the very heart of Kandhamal district, which had seen much violence between 24th and 26th December 2007, attacked and destroyed a Presbytery, convent and hostel damaging the properties.
5. The mobs in Balliguda caught hold of two boys of the Catholic
hostel and tonsured their heads.
6. PHULBANI CHURCH DAMAGED: On 25th august 2008 morning followers of
the late Lakshmanananda Saraswati damaged the Catholic Church in Phulbani, the district headquarter town.
7. MOTHER TERESA BROTHERS ASHRAM ATTACKED: mobs attacked the Mother
Teresa Brothers’ residence and hospital in Srasanada, destroyed once before and rebuilt two months ago, and beat up the patients.
Fundamentalists have targeted Priests, religious and also the Faithful in Pobingia also.
8. BHUBANESWAR BISHOP’S HOUSE ATTACKED: On the morning of 25th August
2008, violent mobs made several attempts to enter the compounds of Catholic Church and Archbishop’s house in the heart of the Capital of the State of Orissa. They could not enter because of the police presence. They threw stones at the guesthouse of Archbishop’s House, damaging windows.
9. DUBURI PARISH; Another group of fundamentalists entered presbytery
in Duburi parish, managed by the SVDs and destroyed and damaged property. Two priests of the parish are missing.
10. Mr. Jamaj Pariccha, Director of Gramya Pragati, is attacked and
his property, vehicle etc. damaged, burnt and looted.
11. A Baptist Church in Akamra Jila in Bhubaneswar is also damaged.
12. Christian institutions like St. Arnold’s School (Kalinga Bihar),
AND NISWASS report some damage.
13. BOUDH DISTRICT [Adjoining Kandhamal]: Fundamentalists enter the
Catholic parish church and destroy property. People are fleeing to safer places. But nothing seems safe.
14. Muniguda Catholic Fathers and Nuns’ residence have been damaged.
15. Sambalpur HM Sister’s residence (Ainthapalli) has suffered
damage.
16. Padanpur: One priest is attacked and admitted to a hospital.
Hostel boys and the in charge have moved away from the place.
17. Madhupur Catholic Church currently under attack.
18. SMALL CHURCHES: Attempted violence on small churches in various
districts, including Padampur, Sambalpur near GM College, Talsera, Dangsoroda, Narayanipatara, Muniguda, Tummiibandh, Tangrapada, Phulbani, Balliguda, Kalingia, Chakapad, Srasanranda.
19. VILLAGE CHRISTIAN HOUSES ATTACKED: Houses attacked on forest
hamlets of Balliguda, Kanjamandi Nuaguam (K.Nuaguam), Tiangia (G.Udayagiri), Padangiri, Tikabali.
20. KALAHANDI DISTRICT: houses burnt even though the district is more
than 300 kilometers from the place where Swami Lakshmanananda was killed.
21. Pastor Sikandar Singh of the Pentecostal Mission beaten up and his
house burnt in Bhawanipatna.
22. Kharihar: 3 Christian shops were looted and burnt. Pastor Alok Das
and Pastor I M Senapati beaten up.
23. Aampani: Pastor David Diamond Pahar, Pastor Pravin Ship, Pastor
Pradhan and Pastor Barik beaten up and chased away with their families.
24. Naktikani: Mob surrounds village to attack Christians. The
government has sent forces, it is reported.
25. G. Udayagiri Block: Village Bapuria (under Raikia Police Station) and other 5 villages, over 3,500 Christians were chased out of their homes into the nearby jungles.
26. Over 100 houses and 3 Churches were demolished in Raikia Block on the night of 25 August 2008. Even as the Home Minister, the President of India, The Chief Minister of Orissa, the Chief Secretary of Orissa, the Director General of Police of Orissa were all informed of the impending threats throughout the day on the 25th August 08. Official inaction and connivance with the perpetrators of violence should be ascertained.


[This list is compiled with assistance from Archbishop’s House, Bhubaneswar, aicc local leaders in Kandhamal and around Orissa and other sources]
Posted by Ecclesia at 11:30 PM No comments: